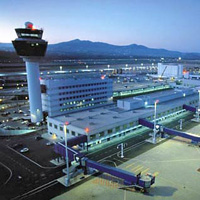 GETTING TO THE AIRPORT

You can take Metro Line 3 to and from Athens, a relatively new train service and an amazing feat of engineering. The Athens Metro wasn’t just a building site. It ended up a spectacular archaeological dig that brought more than 50,000 ancient treasures to light. The airport is also well connected to Athens Central railway station, called Larissis Station, via Suburban Rail trains. The Suburban Rail service also runs regular trains between the airport and Pireaus, the main port. And Corinth also connects with the airport by rail, a journey of an hour and twenty minutes.

There’s a good choice of buses to and from the airport. Some take you directly into Athens city centre, others go out into the surrounding countryside, to the region’s tourist resorts and to the city’s ports. A whopping six bus routes leave from the airport, connecting you with Athens and the immediate surrounding area, and Piraeus. All of these let you off outside Departures and pick up outside Arrivals. Head for exits four and five. Another five buses head off for regional destinations. All these regional services drop off outside Departures and pick up at Arrivals exits 2 and 3. You can’t miss it – it’s just opposite the airport hotel.

You can access Athens International via the main access road, the well signposted Attiki Odos Road. There are plenty of car hire outlets at the airport and if you’re driving off for a Grecian adventure you’ll probably hit Athens – where all the major roads meet – first and navigate from there. If you’re not driving you can always grab a cab at the designated rank at exit 3 in Arrivals. Alternatively choose from six car rental companies.

Athens International has almost 5000 short and long term parking spaces, none of which can be pre-booked. Take it as you find it! Once you get there, the parking facilities are very good and you don’t need a degree in electronics to suss out the system. Just find an automated payment machine. Keep your eye on one of the airport’s numerous electronic message screens, which give you real time information about how many spaces are left. (They don’t tell you what to do if the car parks are full, but fingers crossed….!) There’s parking control equipment at the entrance of all three car parks. You’ll find electronic pay machines in car parks P1, P2 and P3. At P1 head left of the entrance. In P2 you’ll find them next to the entrance of the Public Service Offices. And they’re clearly visible in P3, at airport shuttle bus stops and pedestrian bridge.

Car parks are conveniently located right in front of the main terminal buildings. If you can see the airport’s own hotel – you can’t miss it – you won’t be able to miss the car parks. They’re on either side. If you’re there for less than five hours head for car parks P1 and P2, both of which are short term. You’ll find them directly outside Arrivals. If you’re parking for more than five hours hit P3, the long term car park. People with disabilities can take advantage of easy-access car parking spaces dotted around car parks P1 and P2.

The airport offers posh parking too! If you’ve got a few quid to spare, or you’re a celebrity, or you’re there on a generous business budget, treat yourself to the airport’s special Executive Valet Service. Head for the main terminal and find Entrance 3, Departures. Hand over your car keys to the friendly Executive Valet people and leave your car in safe hands. It’ll be delivered back to you on the date of your choice. This is a good idea of you are prone to losing the car in anything bigger than Sainsbury’s car park.

The airport has loads of state of the art information screens and real time information all over the place. This is a legacy of the recent Olympics, which saw the airport and vast areas of the city regenerated. The staff are friendly and, like most Greeks, anglophile. If shopping is your thing, you needn’t go far before you hit some excellent international shopping at the airport’s own Retail Park, just over a mile south of the main terminal. Get there by car via the Attiki Odos highway, taking the Airport Retail Park exit. Or hop on a smart airport bus. What’s there? You’ll love this… there’s an Ikea where you can pick up a few bits of flat pack on the way home (we’re joking!). Plus loads of factory outlets, megastores and eateries.

Kids will have great fun while you wait for your flights. Banish their boredom and take a bit of pre-flight grown up time for yourself… leave the little ‘uns at ‘The Smile of the Child’, a safe area where children get to play with all sorts of innovative and exciting stuff, from feely soft building shapes to supervised games. They’ve employed specially trained staff so you can leave your kids there without a qualm.

Like many major airports Athens is keen on promoting local art and crafts and they’ve got a permanent exhibition dedicated to Eleftherios Venizelos, after whom the airport is named. There’s even a Museum on site and you’ll find regular exhibitions of paintings, photographs and other cultural bits and bobs. Nice one… if you happen to get stranded at least there’s more to see and do than just shopping.

Back to Greece flights