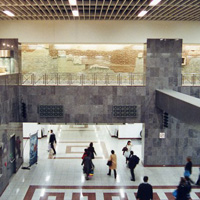 Trains to Athens Airport
Athens Airport is central and convenient. You can take Metro Line 3 to and from Athens, a relatively new train service and an amazing feat of engineering. The Athens Metro wasn’t just a building site. It ended up a spectacular archaeological dig that brought more than 50,000 ancient treasures to light. Athens International Airport is also well connected to Athens Central Railway Station, called Larissis Station, via Suburban Rail trains. The Suburban Rail service also runs regular trains between the airport and Pireaus, the main port. And Corinth also connects with the airport by rail, a journey of an hour and twenty minutes.
Buses to Athens Airport
There’s a massive choice of buses at Athens Airport. Some take you directly into Athens city centre, others go out into the surrounding countryside, to the region’s tourist resorts and to the city’s ports. A whopping six bus routes leave from the airport, connecting you with Athens and the immediate surrounding area, and Piraeus. All of these let you off outside Departures and pick up outside Arrivals; head for exits four and five. Another five buses head off for regional destinations from the airport. All these regional services drop off outside Departures and pick up at Arrivals exits 2 and 3. You can’t miss it – it’s just opposite the Airport’s hotel.

You can access Athens International Airport via the main access road, the well signposted Attiki Odos Road. There are plenty of car hire outlets at the airport and if you’re driving off for a Grecian adventure you’ll probably hit Athens – where all the major roads meet – first and navigate from there. If you’re not driving you can always grab a cab at the designated rank at exit 3 in Arrivals. Alternatively choose from six car rental companies at the airport; head for Arrivals in the main terminal.

Back to Greece flights