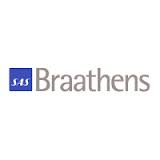 Merged with SAS in 2007
SAS Braathens is the original name for Norway's biggest airline. SAS Braathens was the result of a 2004 merger between Scandinavian Airlines Norwegian division and a company called Braathens. In 2007 the airline joined the main body of SAS, changing its name to the long and lumpy 'SAS Scandinavian Airlines Norge'! Their main hub is Oslo airport. Later in 2007 they wisely shortened the name again to SAS Norway. SAS Norway, the new company, remains Norway's biggest airline with a massive 440 departures flying out every day.

Where they fly to in Southern Norway
SAS Norway, previously SAS Braathens, runs routes inside Norway and out into Europe. They carry about ten million people every year and makes enormous profits. The SAS Group as a whole enjoys a vast route network of around 150 key business and holiday destinations. SAS Norway covers 55 of these, flying from Longyearbyen up in the far North to warmer Las Palmas. For the 'plane spotters amongst you, SAS Norway runs sixty or so aircraft, mostly Boeing 737s with a few Fokker 50s and a couple of Avro 70s thrown in. Southern Norway routes include popular destinations Alesund, Bergen, Haugesund, Kristiansand, Kristiansund, Molde, Oslo, Stavanger and Trondheim.

Throughout Northern Norway
Northern Norway destinations with SAS Norway include Alta, Bodo and Harstad - Narvik. Plus there's Kirkenes, Longyearbyen and Tromso, Norway's capital city, a bustling place with a lively nightlife. Wherever in Norway you fly with ex-SAS Braathens airline SAS Norway, you'll discover a land of massive mountains, the midnight sun and Northern Lights. If you're flying around this dramatic country - with its harsh climate - it's good to know that you have the commercial clout and excellent safety record of someone as big as SAS behind you!