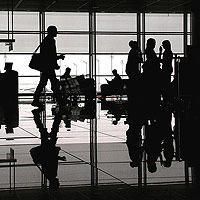 Gatwick Airport Routes - From Budapest to Las Vegas!
Around 90 airlines offer 200 Gatwick routes worldwide. Not even Heathrow offers such a huge choice of destinations. For many years Gatwick routes have focused on the Canary Islands, the Costa del Sol, the Algarve and the Mediterranean. Gatwick airport is also synonymous with routes to winter skiing destinations. Nowadays, beach holiday favourites like Tenerife and Palma have been joined by exciting Gatwick routes to popular city break destinations from Budapest to Las Vegas, and a host of regional airports from Bordeaux to Bologna. Gatwick routes to the USA include New York, Orlando, Tampa and Dallas. You will even find budget routes from Gatwick to exotic locations like Goa in India! Gatwick is also an important base for national airline routes to places like Malta, Norway and Cuba. Gatwick has revolutionised travel closer to home with convenient Gatwick routes to Ireland and UK airports like Edinburgh and Manchester. So much competition has also led to more Gatwick routes with British Airways. Use Directline for a convenient one-stop search.

Routes From Gatwick - The widest choice

More low-cost airlines operate from Gatwick than from Stansted and Luton, where Ryanair and Easyjet have almost total domination! The amazing choice of routes from Gatwick airport is down to the emergence of airlines operated by major holiday companies like Thomas Cook. Airlines like Thomsonfly operate dozens of routes from Gatwick serving the beach holiday market and homes in the sun. Search Gatwick routes with Directline and fly off to the eastern limits of Europe, the Caribbean, the USA or even the Arctic Circle!

Back to London flights